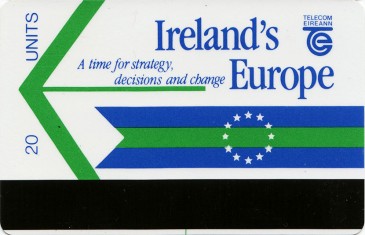 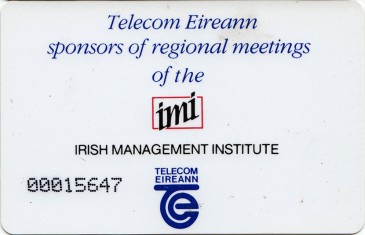 Issued free of charge to delegates at one of the 1989 IMI (Irish Management Institute) conferences called "Ireland's Europe". A 50 Unit Callcard was also issued. Cardphones for the Autelca system were in place at the Great Sothern (now Malton) hotel where the conference was held in Killarney. Some of the 20 unit cards were sold to members of the public for £3.50 and sold out very quickly. Unfortunately after the conference many of these cards were binned by hotel cleaning staff due to delegates lack of interest or knowledge of the cards.

All the 50 Unit cards were given out at the conference. Some cards re-surfaced after media interest but having been stored improperly more than likely, many were in poor condition. These cards are the rarest Callcards and at the height of Callcard collecting a pair could sell for £1, 400.