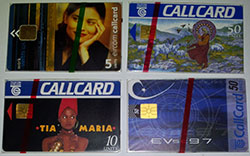 When we refer to a Callcard as being mint, we assume the Callcard has never been used and the units on the card remain unused. Many collectors favour mint Callcards, still in their wrapper, while others do not mind if a card is mint or used.

While it is impossible to verify if either Limerick or Dublin trial Callcards are mint, Galway trial cards used a visual indicator to identify units erased and a unit checker is available for chip based cards. A unit checker, which was sold via the Callcard Collectors Club and also accompanied AIB Smart Card trial cards can report a chips unit count safely by placing it over the cards chip.

More advanced smartcard readers can extract even more details about the cards chip, including storage memory, country the chip was encoded for and also unit balance.