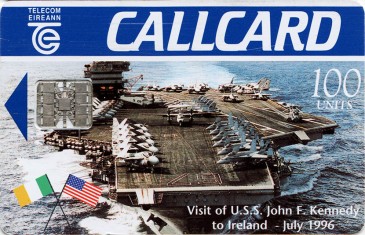 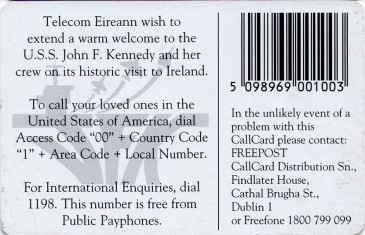 This Callcard was issued to mark the visit of the U.S.S John. F. Kennedy (JFK) ship to Ireland in 1996.

Hi There i have two cards in mint, one with wallet & one without . The Wallet is green with Cead Mile Failte ...... Telecom Eireann Welcomes the U.S.S. John F. Kennedy and Crew to Ireland . it also has a booklet telling how to call home from Ireland

how much is one of these cards worth in origional wallet, never opened

With the JFK Leather wallet? I would say €35-40 should be possible, maybe a bit less. Still though it's a rareish card to find mint, and the wallet was only given out to those on board the JFK Ship during it's visit to Ireland at the time,

Nick
+2 #1 snoopy chandler 2013-09-28 11:38
how much is one of these cards worth in origional wallet, never opened
Refresh comments list
RSS feed for comments to this post 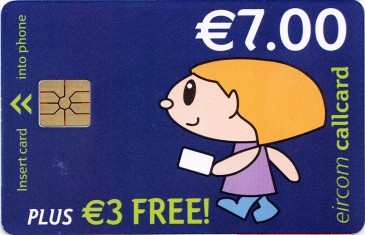 The "Simply Talk" Callcards were Eircom's final definitive range of cards that were issued. [...]