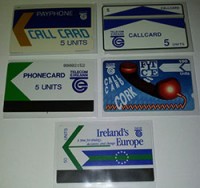 Telecom Eireann first introduced phonecards into the Republic of Ireland in the year 1988. The brand name chosen for these cards was “CallCard”. Telecom Eireann, Ireland's state-owned telecommunications company became privatized in 1999. Subsequently the name of the company was changed to Eircom.

During the beginning of Telecom Eireann's phonecard roll out, they launched three magnetic phonecard trials in different cities around Ireland. Each of these three cities also used different card systems as part of the trial. These systems were:

Special promotional trial cards were further produced using the GPT and Autelca card systems, which had far fewer cards produced. The Cork FITCE convention card, which was an official overprint of the GPT test card, was issued to delegates at the FITCE conference in Cork 1988. 960 of these cards were issued. Surplus FITCE cards were briefly sold in Dublin after the conference[...]

Telecom Eireann initially rolled out three different Callcard trials, throughout the years 1988-1989. The phonecard types trialled at the time were the cheaper, more typically used magnetic strip cards. The exception being the Galway trial that used the more secure optical tracking strip[...]

Chip cards, or smart cards shared the same form factor as credit cards and other magnetic type phonecards. This made them ideal to use for phonecards, as they were much more convenient than cash which cluttered up wallets. These cards had a microchip installed in a position on the card. Variations have been known to exist, although generally it was positioned centre-left on the card.

Invented by French engineer Roland Moreno in 1976, Telecom Eireann had seen how well the chip cards were working for France Telecom, who introduced smart phonecards in 1984[...] 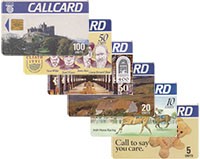 When the three Callcard trials ended, Telecom Eireann chose to use chip based smart cards for their phonecard product instead. The smart card, invented by French engineer Roland Moreno in 1976 was the most secure, and technologically advanced phonecard system in it's day.

Interestingly Ireland was one of the first countries in the world to introduce chipped phonecards, alongside France in 1990, just three years after they began the phonecard trial[...]

Throughout the years, many different cards were produced for testing, maintenance or demonstration purposes[...] 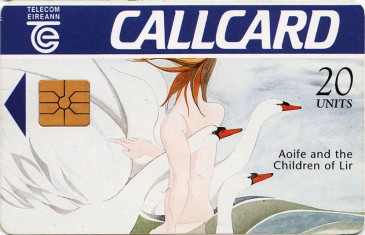 Aoife and the Children of Lir

The Irish Mythology definitive set was released during the summer of 1994. four cards, depic[...]